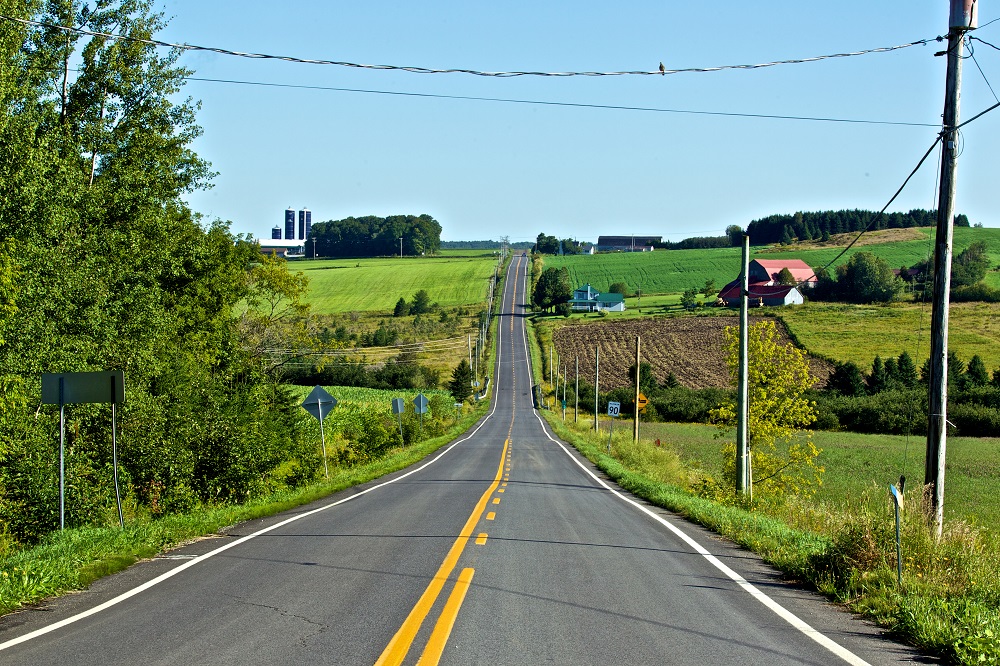 Welcome in the Valley!

The vast Coaticook River Valley Region in Eastern Townships comprises 1332 km² and 19,000 inhabitants. Breathtaking landscapes consist of hills, mountains, rivers, forests and agricultural lands. It is bordered by the upper part of the Appalachians plateau that introduces various levels in the south-north axis of the Coaticook River Valley and its tributaries, Moe and au Saumon rivers. Outdoor activities, culture, a rich patrimony and religious heritage are featured, as well as Anglo-Protestant and French-Canadian cultures that blend together on the territory.

Travelling throughout the region, everyone is charmed by the beauty and the diversity of its twelve municipalities. Close to major cities, the Coaticook River Region offers the best of two worlds.

The lively Coaticook and its 9000 residents, is the region’s heart. Here we find all services and facilities as well as public and intercity transportation, the Acti-bus. Several activities and touristic attractions have contributed to its reputation, such as the beautiful Parc de la Gorge and Foresta Lumina, a starlit pathway, emphasizing scenography, light shows and video mapping, the Pavillon des arts et de la culture and a wide range of accommodations. Barnston and Baldwin are two hamlets integrated into Coaticook, where we reach Mount Pinnacle, Lake Lyster and its beautiful public beach.

True foodie haven, Compton is the region’s second largest municipality. Agrotourism discoveries are numerous, such as Fromagerie La Station, Domaine Yves Hill, Vallons maraîchers, l’Abri-Végétal and its numerous orchards. More local products are to be discovered at the evening market as well as during Les Comptonales. With its 3250 inhabitants, Compton is located half-way between Coaticook and Sherbrooke.

Little village furrowed by the Coaticook River, Dixville is bordered with valleys, mountains and agricultural lands, lending it an adorable cachet. Over 700 Dixville residents may greet you at the Coopérative, where we find a restaurant and accommodations.

Along the American Border of the States of Vermont and New Hampshire and protected by the impressive Mount Hereford, this quiet municipality, with its 275 residents, is a mountain biking haven. Nearly 55 km of landscaped trails through Circuits Frontières in the heart of Hereford community forest await visitors.

Blessed with a rare natural beauty, Martinville is close to major cities (Sherbrooke and Coaticook) and offers a pretty view to visitors as to its 470 inhabitants. There is a large lake where several bird species and animals have elected their kingdom. In the spring, it becomes a sanctuary for Canada geese and Snow birds. A waterfall is located near the entrance to park du Vieux-Moulin, close to a new pathway alongside the river.

Among hills, fields and forests, the village of Sainte-Edwidge-de-Clifton offers several public services to its 520 residents (convenience store, school, restaurant, public pool). There is also a hiking trail in a wooded area and a magnificent church. Here, we find warm hospitality!

A nature’s paradise, the village of Sainte-Herménégilde boasts three lakes suitable for bathing, Wallace beach and Duquette marshland. Settle on a campground or in a rented house to benefit from tranquility as do the 660 residents. Travelling the Centennial road, we reach Mount Hereford summit (875 m high), third highest in Eastern Townships.

With an incredible vista, Saint-Malo is one of the highest villages in Quebec. From La Montagnaise tower, one can see as far as 80 km. There are some five hundred residents in this municipality. There is a restaurant, a hiking trail, circuit vitalité, and a charging station.

Quiet municipality of some one hundred persons in the heart of the Appalachians, it is characterized by its cultural dynamism in every aspect. The church, of great beauty, was converted into a museum, a concert hall and art gallery. At Maison de l’arbre, you may eat on the terrace, enjoy a cup of coffee and regional delicacies. Come and appreciate the unique 3-km poetic pathway where stone sculptures and poetry embellish the way.

At the crossing of two major roads, the 600-inhabitant municipality stands out for its diversified agriculture as well as it agrotourism businesses. Blueberries, raspberries, apples, honey, garlic, fresh vegetables, a nursery, equestrian centres… From the golf course, the vista is spectacular. There is a cycling path (cross-country skiing in winter) as well as Tomifobia Trail, where over one hundred bird species may be seen. Here are some not-to-be-missed activities!

Third municipality in importance, this small dynamic city is ideally located. With a rich patrimony and abundant nature, Waterville deserves a visit. Numerous services are offered to its 2,200 residents.